We’re starting to look at the body today and drilling some of the necessary holes prior to any sanding or painting. There are a couple of holes required between the three main cavities in the body to allow wiring to be threaded through later on in the build. It’s important to do the drilling at this early stage so that it’s done and out of the way as drilling these holes at a later stage in the build could prove very difficult indeed. 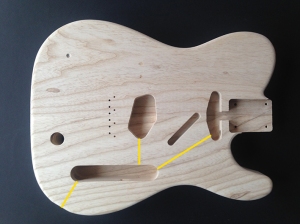 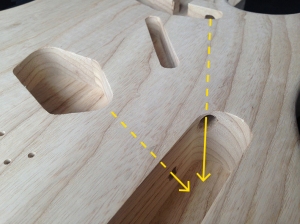 The first of the pics above shows the three main conduits which need to be drilled out to allow the pickups and controls to be connected together under the surface of the wood. The second pic shows the two main pickup conduits. The left hand hole will house the bridge pickup to control plate wires and the hole on the right will be used to connect the controls with the neck pickup. Drilling these holes is very tricky and it’s best to set up some sort of jig or guide for the drill so as not to veer off course and (nightmare scenario) break through the surface of the body! 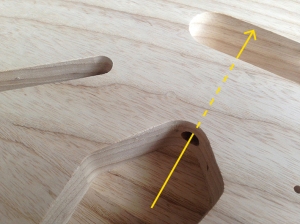 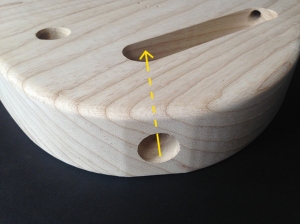 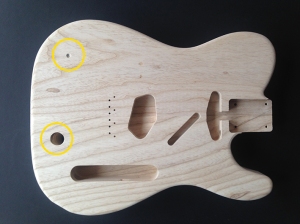 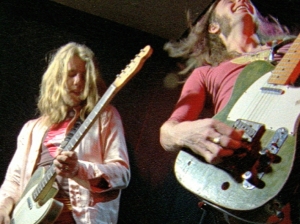 You will also notice in the above pic that we have now drilled the famous ‘mystery hole’ in the body. The hole has been drilled to the same diameter and is in the same position as on the OG. If you look just above the mystery hole you will see a smaller, rounded, indentation toward the top of the body. This is a replication of a small mark created by Francis at his first attempt to drill the main hole. He must have stopped pretty quickly and decided to site the hole lower down at the last minute. This particular detail is a small, not quite circular, rounded and concave indentation which takes quite a lot of digging out and smoothing many times over before it looks right. The second pic of Rick and Francis provides a great view of both holes. 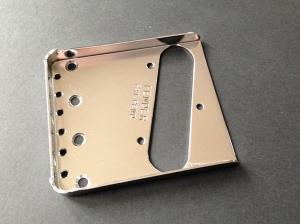 Not many people know this, but Francis’ guitar actually had the green paint job (and ‘mystery hole’ drilled) prior to any hardware modifications and retained the standard Fender bridge plate (with three brass saddles) just like the one shown above, for a brief period. An extremely rare (and fleeting) glimpse of it can be seen on Quo’s Doing Their Thing TV appearance (September, 1970). Checkout this clip and stop at 3:42 for a look.

The bridge plate setup was standard and featured the usual three brass string saddles. The standard saddles caused intonation problems (as described in an earlier post) and so Francis decided to switch to a six-saddle setup. The way this was executed is what we are about to replicate in the following steps using a standard Fender bridge plate as the donor. Francis decided to literally saw the standard plate in two and to use a Tune-o-matic style six-saddle bridge coupled with a tailpiece taken from an old acoustic guitar rather than run the strings through the body (as is standard). To ensure a correct cut we have taken detailed measurements from close-up pics of the OG. So, we are going to make a bridge plate that will no longer be a ‘bridge plate’ as such. It will just be the housing for the bridge pickup as we will be using a TOM-style bridge for the build. 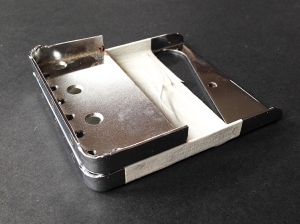 Using a discarded piece of bridge from a previous build we now align with the new bridge (see above) in order to mark out where the cut goes. We then make the cut. After cutting we are left with some very rough edges which will have to be filed and polished. Also, the newly cut corners will need to be rounded off. 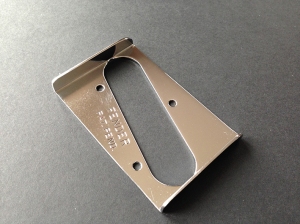 As you can see, we have ended up with a very nice, correctly sized, shiny (too shiny for the final build), bridge plate with rounded corners and polished edges to ensure that you don’t rip your hand to shreds when playing! After some light relic’ing and some extra holes drilled for fixing to the body, we are ready to assemble the plate with a bridge pickup. 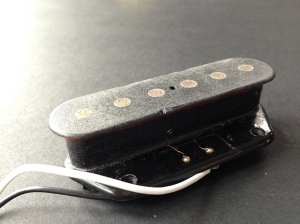 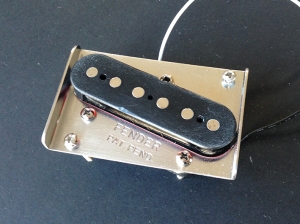 The pickup is a standard aftermarket part and has been relic’d to look like Francis’ original (standard) Fender pickup. The other picture above shows the complete assembly ready to be fitted at a later point in the build. Note the holes (with loose screws in) drilled bottom left and top right. 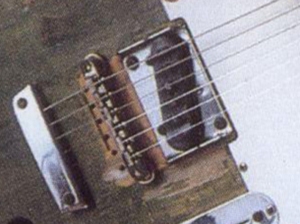 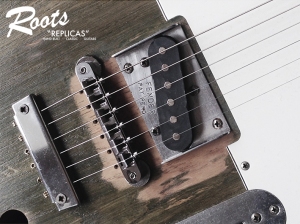 Take a look at the two pics above to compare the general hardware setup. The first pic is a close-up shot of the OG from the cover of the Rollin’ Home 7″ UK single. The second pic is taken from a previous Roots Replicas build of the Francis Rossi Live Aid guitar.

This is Quo from 1971 on German TV performing Tune To The Music. This is just the year after the Doing Their Thing (September, 1970) clip I posted above where the Tele still had it’s original standard bridge plate and brass barrel saddles. This clip is from the following year and the bridge plate has now been sawn, the back end of it discarded along with the saddles and a Gibson Tune-o-matic has now been fitted. You will also notice that the strings are now anchored by the tailpiece and are no longer running through the body. Take a look at the guitar from 0:08 and you’ll see for yourself. Everything looks quite shiny and new in this video.

Thanks for looking. I will return with some more progress on the build soon. 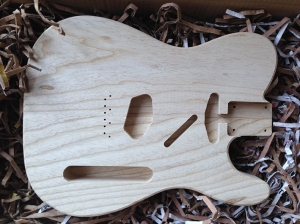 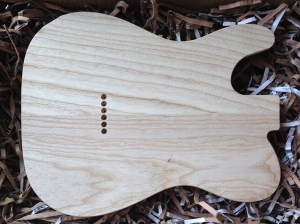 For this build we are going to use a solid swamp ash body just like Francis’ guitar. The OG (Original Guitar) is actually a 3-piece swamp ash, but a 2-piece body with a right grain type is more widely available so that is what we are using. The body is carefully selected for overall colour and grain match to the original as closely as possible. 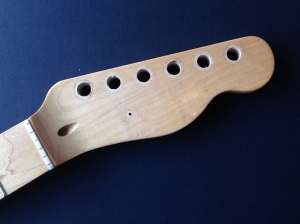 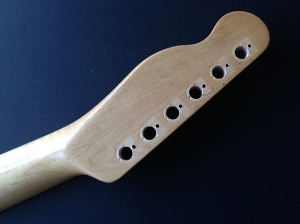 The neck we are using is a standard 1-piece (21-fret) maple neck, with access to the truss rod via the headstock. This is not an exact replica of the OG neck as the original neck is a 2-piece maple with the truss rod adjustment at the heel. However, the important thing is that the neck does not feature the ubiquitous ‘skunk stripe’ seen running down the back of the neck on many replica builds. An original 2-piece neck would be cost-prohibitive here, so we’re going with something which looks the part. 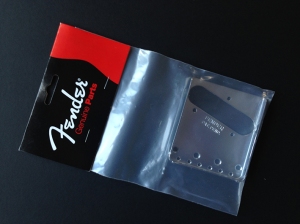 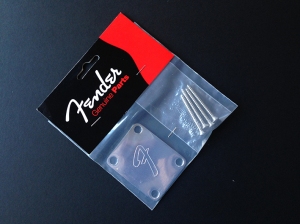 A standard Fender bridge plate and ‘F’ plate are essentials for this guitar to look authentic. Try to cut corners on these details and the finished guitar just won’t look right. 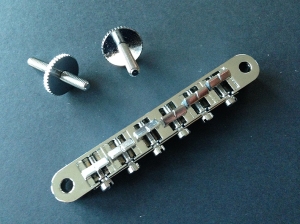 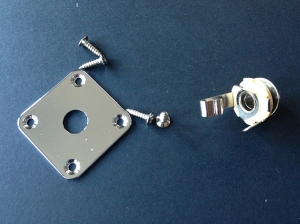 Above is a Tune-o-matic style bridge. The TOM bridge has been around since the early 1950s and was introduced by Gibson. The bridge that we are using here is a very high quality copy.

Another important detail to get right is the jack socket. Both Francis and Rick have the square jack plate installed on their Telecasters. The common sunken circular jack has many problems associated with it including not being able to insert angled leads and also the jack cup falling out on stage.

This is Paper Plane (UK release: 18 June, 1972). There are some great close-up shots beginning at 1:11 and there are plenty of opportunities, throughout the video, to see the various patches of wear and tear on the guitar body.

Thanks for reading the blog so far and please join me for my next post where we will start with the bridge plate.